The purpose of this Drop and QB Read Progression Drill is to teach and improve the footwork of the QB during drop back and going through the progression. 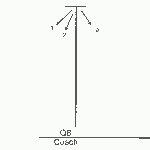