“Even though all coaches would like to have receivers with great speed and quickness, there is a place for the receiver who, lacking speed, makes up for it with precise pattern execution, complete focus on the ball when it is thrown his way, and the ability to get away from defensive players of to find the hole between zone coverages.”

“Because of his responsibilities in blocking defensive linemen and linebackers, the tight end must have the size to get the job accomplished. He also must have the same ability as a wide receiver to run accurate pass patterns, to get open, and to make the catch.” 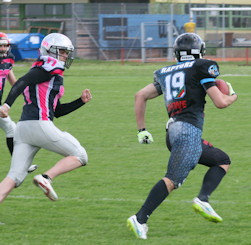 What’s a Wide Receiver or Tight End good for if he’s not agile? He might be fast, but that’s what nowadays defensive backs are, too. So, to break away from coverage a receiver needs to be agile and have good footwork and body control.

Every long run or short pass with good yac (yards after catch) is usually the result of one or more great open field blocks by wide receivers. So neither the coach nor the receivers should underestimate the power of a good blocking receiver corpse.

Of course since catching and running with the ball should be the main qualities of receivers. So handling the ball, be it at first catching it, often even in heavy traffic, or afterwards holding on to the football when being tackled are crucial to the success of the whole team.

Especially catching the ball in different situations and from different angles can’t be practiced enough by receivers. Ball don’t always get to the receiver in the ideal position. Some come low, so the receiver has to be able to get down to the surface, at other times the ball comes over the “wrong” shoulder or very close to the sideline and always it’s the receivers responsibility to react accordingly and make the catch.