“The role of the running back has changed dramatically in recent years. Being able to carry the ball, make people miss tackles, and run over smaller defensive players no longer is enough. Today’s running back must be a multi-faced athlete. He must be able to carry the ball 20-30 times a game, pick up blitzing linebackers, plus, on occasion, block the bigger defensive linemen. At the same time he must have the ability to catch passes like a tight end or wide receiver.”

For all these skills the running backs have to be trained with special running back drills :

Agility is a skill every athlete will need. But there are still some differences in what each sport requires exactly and in football this is even position specific. A quick and swift runningback that looks as if he could turn on a dime isn’t just from god given talent, but from hard work. Hard work in terms of getting your muscles flex fast enough, getting complex bodymovements so deep into the running back’s nerval system that it become natural to move like this. Gale Sayers, Barry Sanders, Reggi Bush and a lot more running backs made and make a good living on being agile, agile enough to make a defender miss, with losing as little forward momentum as possible. These swift moves come from lots and lots of footwork drills…

These running back drills focus mainly on the running back’s footwork and with that his ability to run not only straight aheady but also being able to change dircetion without losing momentum. 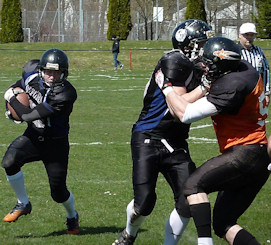 Even though the running back mostly should be blocked for, once in a while he will be asked to block for another player running the ball. This is very obivously true for running backs playing in a 2-back system, but might also be true for plays out of a 1-back formation. The blocking skills of a running back have to be as versatile as all his other skills, as he might be asked to block an defensive end on a power play, a linebacker on an Iso-play or a defensive back in open field on  a sweep-play or a reverse or just simply on a quarterback scramble. 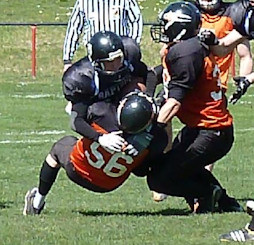 Ball handling is crucial for a running back. If he can’t handle the ball well, be it taking a handoff, catching a pitch and afterwards protecting the ball from being stripped from him when he’s tackled, all his running abilities are for naught.

It all starts with taking the handoff in such a way that the ball can be quickly and safely tucked away with as little distraction from running and looking at the defense. The handoff drills should be practiced over and over again and also be incorporated into the other drills until it becomes second nature to the running back to take the handoff. Additional work has to be done if you are running some kind of option where the quarterback might put the ball into the running back’s pocket but still has the option to pull it out. Here you have to work on good “communication” betweet the quarterback and the running back on when the quarterback decides to “give” or to “pull”, because if there’s a misunderstanding it most likely will result in a fumble.

But taking a secure and smooth handoff isn’t enough. The running back also has secure the football all the way through. Having a good and firm grip of the ball when running and extra securing the ball when being tackled.

So here you find special ball handling running back drills 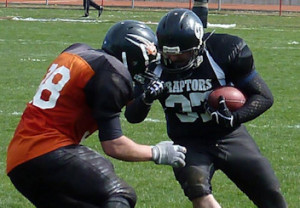 These running back drills focus mostly on putting a running back into specific game situations and  teach him the right skills for these situations, be it reading the blocks of the offensive line or on protecting the ball and himself when running along the sideline. Some of these require the running back to make good use of his agile running abilities which he aquired in the running back specific agility drills. But being agily is the one thing, knowning instinctively when and how to apply these is the next step. But often enough it’s not enough – if at all possible – to avoid the tackle, then even another ability of the running back is asked for: his ability to make yards after contact (YAC). A running back is not only asked to runs as far as possible until he’s tackled but also to make as many more yards while being tackled – but of course also while protecting the football. 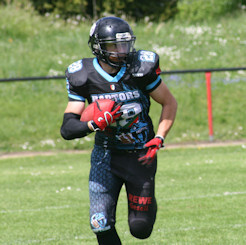 Last not least the modern running back is just a much a receiver as he’s a ball carrier, so his receiving skills also have to be trained. Nowadays a runningback is not thought of as a mere outlet receiver anymore, somebody you dump the ball to when nobody else gets open and the quarterback runs out of time. But instead the running back is an integral part of the passing scheme, moving him around via motions or shifts even in wide receiver positions and from there he’s then also requiqued to run wide receiver routes.
Beginning with running good pass routes, then catching the ball and then running with it.