“An offense must have a proficient player at the quarterback position. Lack of ability at the other offensive positions may be covered up, or compensated for, but if a team attempts to play with a quarterback who lacks the physical skills and mental abilities for the position, the weakness quickly will become evident to everyone.”
[Only] “For a passing team, pure athletic skill – speed and running ability – is not nearly as important as the player’s ability to set up correctly and throw the ball accuratly with good velocity to the proper receiver.”
Tom Bass

The days of the immobile, flat-footed quarterback who just distributes the ball, be it by handoff, pitch or pass are long gone. Of course dropping back – if playing under center – is a crucial agility skill that has to be mastered by most quarterbacks. But running skills be it on a classic option play or a zone read play have long been added to the list of required skills for quarterbacks.

As the quarterback handles the ball nearly every single offensive play, his ball handling skills must be practiced beyond simply running plays in practice. A firm grip of the ball at any time is very important so he won’t lose the ball when hit unexpectedly. The more a quarterback practices these ballhandling drills – which don’t have to be done during practice, so they wont eat up precious practice time – the fewer mishandled balls by your quarterback you will experience in practise and games.

The main task of a quarterback is still throwing passes. So it’s just natural to practice all kinds of passing situations – always working on proper technique. Here are some great drills easily used in sequence as a quarterback arm warmup routine.

Check out this blog post: Quarterback “The Ritual” from Coach Marshall about his Quarterback warmup-routine. 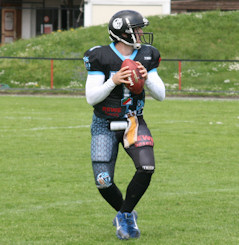 These are the Quarterback drill progressions as Iona College Gaels Headcoach Fred P. Mariani runs them: 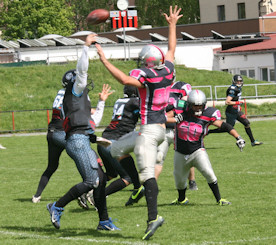 These quarterback drills and program presented are not extensive or long, but rather are realistic in time required to practice and equipment needed to complete. The strength of this program is that it is simple and easy to complete.
If what is presented is practiced diligently, constantly, without change, and correctly then you can expect your QBs to improve their techniques of quarterbacking, especially in the area of the drop back, the set-up and the delivery of the ball in passing.
There are many drills that could be used that are not included here. Take a few drills at each workout period and work on these that best suit you and your QBs’s abilities. I believe that these are good drills and accomplish much of what you want. Taking everything into consideration, drills are fine, but you still must practice most those things you will be doing in the actual game.
This Quarterbacks Drills Progression is contributed by ©2007 Fred Mariani, Head Coach at Iona College – The Iona College Gaels played in the NCAA I-AA Metro Atlantic Athletic Conference where they won a co-championship in 2007 before they discontinued their football program after the 2008 season. Fred Mariani started in 2009 as Director of Football Recruiting Operations for the Rutgers Scarlet Knights and is now (2015) their Director of Player Development.