This can easily be a 20-30 minute practice routine, while it can be reduced/condensed to a pre-game routine. This is something we work with at every practice. As the season goes on, I reduce repetitions and ‘speed’ things up to shorten the routine. It is excellent for ‘warming up’ the quarterback before he works with running backs and receivers.  It is very conducive for either a camp or high school practice situation. The drills are best completed with two or more quarterbacks. One of the neat things about these drills is the only equipment needed is a football and flat cones/markers:

A) Warm Up – In the warm-up the quarterbacks are just playing catch. In the warm-up the QBs are throwing lightly and the coach is working with them on good sound throwing mechanics (right handed QBs). The ball is held at least at shoulder height. Personally, I like my QBs holding it a little higher than shoulder height, by the side of their head/ear. QBs stand sideways with their left hip facing their target, looking down their left shoulder (right handed QBs) at their target. They point their left foot at their target and as they throw they get plenty of whip in their hips and shoulders turning both of them towards the target as they release the ball. Before releasing the ball the right elbow is pointed at their target. As they throw they are transferring their weight from their back/right foot to their front/left foot. Depending on the length of the pass this might involve a short step with that left foot as the weight transfers from the back foot to the front foot. QBs often need to be coached not to overstride. On their follow-through the thumb of the right throwing hand pronates to the outside with the throwing index finger pointing at the target. The full extension of the follow through has the right arm ‘picking’ the right front pocket of the quarterback. If you have access to a weighted ball (2-3 pounds). Having the QBs slowly complete forward and backward windmills with their throwing arms holding the weighted balls and then lightly playing catch (8-10 yards apart) with the weighted balls can help before completing their warm-up with regulation size footballs. Warm-up is 4-5 minutes.

B) Globetrotter – Excellent drill for ball security. Quarterbacks work the football in a circular motion around their head, under their arms, around their waist, around their knees, around each knee, weaving through their legs and finally ‘playing catch’ between their legs. Coach shouts out a command of which body part the ball revolves around. Usually starting with the head and working downwards. Coach also shouts the command ‘reverse’ which changes the direction the ball is rotating. This should be shouted numerous times. The drill concludes with five ‘drops’. The Quarterback dropping the ball and then grabbing it. Five ‘drops’ with the power hand and five drops with the off hand.

C) Quarterback Carioca – Quarterback executes a five yard ‘drop’ while doing carioca. Quarterback swivels his hips back and forth 180 degrees while completing a carioca drill….doing his best to keep his trunk facing to the right (right handed QB) or to the left (left handed QB). Repeat five times.

D) Knee Drill– Two quarterbacks start with their right knees on the ground, facing each other ten yards apart. One quarterback has a ball on the ground next to his right leg. The quarterback picks up the ball with his power hand puts the ball to his ear with his off hand also on the ball and throws it to his partner quarterback across from him, who catches the ball, places it on the ground and does exactly the same thing, throwing the ball back. Quarterbacks continue playing catch in this manner while the coach helps them with the finer points of their throwing techniques: leading with his throwing elbow, ball at his ear and pointing first with his wrist and then his index finger upon release of the ball. When a sufficient amount of repetitions have been completed the quarterbacks then switch knees putting their left knees down and continuing the drill. Again, when a sufficient amount of repetitions have been completed the quarterbacks then put both knees on the ground and continue the drill but now also concentrating on a big trunk turn/twist while throwing the ball to both increase velocity and quickness of release.

E) Toss Sweep & Option Drill – Line of Quarterbacks holding footballs with the coach in the ‘Running/Pitch Back’ position. The coach is in a position behind and off to the side of the quarterback, in the position where a running back would be receiving a toss sweep or an option pitch. The Quarterback faces away from the Coach/running back, in a position where he would be taking a snap from center. Quarterback reverses out and executes a toss sweep to the coach. This simulates either a toss sweep or a quick pitch play. The quarterback then moves to the other side until all quarterbacks have executed the pitch. Then the beginning quarterback again executes the pitch to the coach and all other quarterbacks follow till all the quarterbacks have executed a pitch both to the right and to the left. This is continues until the coach determines a sufficient amount of repetitions have been completed. Now the quarterback executes and option pitch in the same manner. If the type of option your team runs has an inside or outside veer dive fake then this can be simulated in the drill by the quarterback. In the option phase of the drill the coach yells ‘pitch’ and quarterback breaks down and executes a pitch stepping towards the ‘pitch’ man/coach. Again, this continues until the coach determines a sufficient amount of repetitions have been completed.

1) Again QBs head is up with eyes forward throughout every phase of this drill.
2) QBs are always on their toes, this drill helps work with the ‘scrambling’ aspect of the quarterback. 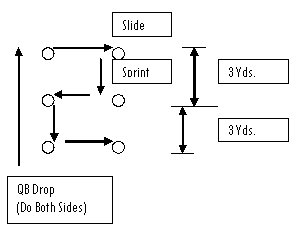