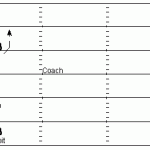 This Drill is contributed by ©2007 Mike Emendorfer, Head Coach at University of Wisconsin at Platteville – The Platteville Pioneers are playing in the NCAA III – Wisconsin Intercollegiate Athletic Conference.