This Running Back Ball Security Drill works on ball security, balance, and using the arm as a part of the RB’s tripod when falling to the ground to gain more yards.

The RB should start in a single arm bear crawl position with his right hand down in the middle of the bags and his feet spread just slightly further than shoulder width apart. He should be holding a ball in his left arm, with his elbow in close to his rib cage and the ball high and in tight to the chest covering all the pressure points properly. Have a teammate or assistant coach stand behind the running back as he is in this position try to knock the ball out from behind. This works proper ball positioning from a different angle than the RB is used to.

At the whistle, the RB should step over the bags in a clockwise rotation. Right foot, then left foot. He should continue to move over the bags, as aligned in the diagram, until he has finished through two or three times. As he reaches his final movement and the starting spot, he should sprint forward ten yards. This will work getting your balance as you fall to the ground, keeping your feet moving, and getting back into the running position to gain yards. Once the group has been through one time, change hands and move counter clockwise.

For additional ball security work, have three players stand outside the RB around the three openings of the bags.  As the RB is moving, the players can hit the ball from behind.  Stress that these players do not grab the ball, only knock at it.  If the RBs have problems holding onto the ball, have them do additional conditioning or some sort of punishment for each fumble. 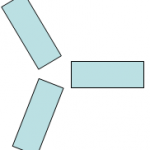