To teach and practice a good stance for the defensive back.

Repeat a couple of times until the coach doesn’t have to correct very much anymore. 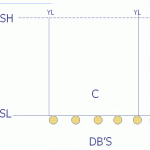